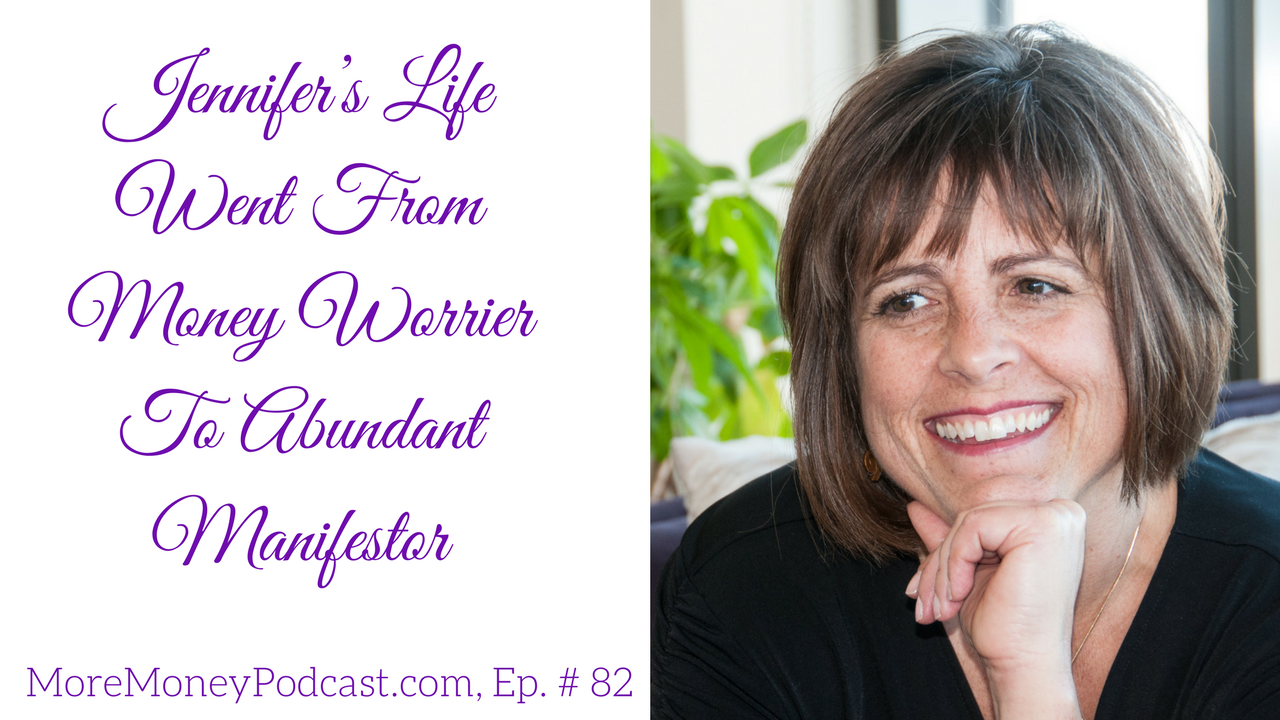 Old Money Story: Life Was Fine, But Worried About Not Having Enough

New Money Story: Life Is Abundant and Keeps Getting Better

One really important thing to Jennifer is to be the example to her children.

Live, Behave and Act In A Matter That Your Loved Ones Will Model

Jennifer has set the example for her two amazing teenagers, who are learning the Law of Attraction with her.

In fact, one of them just moved into her first new home and in working on manifesting $5,000 using the principles in the Manifest $10,000 book.

This same daughter decided she wanted to work at a fine dining restaurant, so she identified the one she wanted to work at, offered to work a day for free and at the end of the shift, she was offered the job. Her move was delayed by one month, so they did not end up hiring her. She found a second restaurant she wanted which had a better schedule, more money per hour and it is predictable. Her attitude is “something better is going to come along”.

Jennifer had to learn how to make LOA work for her. Let's find out how she did that.

Life Will Take You Where You Need To Be

Have You Ever Had “No Idea” Where You Connected With Someone? Jennifer has been a client for one year but we have no idea where we connected. She says she started getting emails from me but has no memory of signing up for anything. Overtime, she scheduled a call with me.

Let's look at where Jennifer came from.

Is This Your LOA Story Too?

Jennifer learned about LOA years before and she wanted to believe it. She followed this path:

Learn Why Jennifer Said Yes To Being A Client of Mine

Jennifer decided she could afford to take a risk on signing up for a workshop because it didn’t cost that much and she knew she needed help. She knew she needed to create more successful results. Overall she was concerned about price, money and lack but this fit for her.

She had a great life. Nice house, great kids, survived a divorce that she felt OK about, she had a secure job that paid her bills.

She remembers a time in her past when she was shopping at WalMart and not being able to afford something that cost $2.37 - which reinforced the worry of not having money.

Life is Abundant Now For Jennifer

Just keeps getting better and better. She has learned to surround herself with things that keep her energy up. She is now surrounded with people who believe what she believes. Conversations with kids are incredible in that we share what we are manifesting and this keeps creating more and more.

Today, she isn’t worried about money. She realized her confidence in that she has always been provided for and trusts that things will always work out.

Do You Need Help Getting Out Of Your Own Way Like Jennifer Did?

Jennifer worried a lot about the how. Her brain would kick into overdrive and she wouldn’t go anywhere. We trained Jennifer out of “thinking” and into “detachment”. In her own words, “Working with you changed that”. She said I had to talk her off a cliff or two several times.

Today, Jennifer let’s one decision unfold into the next thing which always leads her to what she ultimately wants. She has learned that all decisions allow information along the way.

Jennifer Learned To Be  A Powerful Manifestor

Jennifer says I taught her how to enjoy and have fun in the process of letting life unfold from one decision to the next. She now sees all decisions to be information and can gauge if things fit or not more easily.

When things don’t feel good, she would make new decisions. For example, she lived with her mom, then to an apartment and as both of these didn’t feel good after a while, this has led her to live in the house of her dreams. She followed those things that inspired her. Those decisions and experiences, led her to where she ultimately needed to be.

It is a home she had lived in before. When she lived there she was married and raising her kids but now the home was in a bad shape of disrepair. It was filthy, children had drawn on the walls but she knew that it was a beautiful home. What it needed was love and attention. She knew it was her final destination. In her divorce she was deeded the home but could not afford to live there. She sold it and this new buyer refinished it from top to bottom and inside out.

Last year, Jennifer wrote an inspirational letter to the current owners asking if it was there forever home and if it was not, that she could have the first right of refusal.

It was out of her price range, but 5 months later she received a phone call asking her if she was interested in the house. The owner asked her if it was in her price range. Her response, “I think I can work that out”. Never before would have the former Jennifer said this. Ultimately, she wanted to see it. It was four times what Jennifer was paying for her apartment.

The old Jennifer would have tried to figure out how she could afford it before she saw it.

Jennifer called her mom and asked her mom if she would be open to go see the house with her.

They looked at it together and fell in love with it.  They purchased this home 42 days later.

The Universe if a reflection of us!

Jennifer Did The Manifesting Work

Jennifer did the work of manifesting this home for her and her mom. She was committed to grow, listen and trusting the process.

During the year of working with me, she got the idea she wanted to live in her dream home. She kept in the process until she was inspired to send the letter.

She remembers wanting to live in this house, and scripting about the house but remembers asking if it was OK to manifest an exact house. I told her it was OK because it might lead to something better. However, Jennifer wanted that house. She could get very detailed about how it would feel because she had lived there before. All of this led her to writing the letter.

Jennifer had detached from the outcome because she was happy in her script. No matter what happened with her letter, it was still a beautiful house and a beautiful experience there.

Jennifer Will Not Doubt Again

Her trust muscle keeps getting stronger and stronger.

She has sat in several moments knowing that she has created them.

She is excited for what is next.

New opportunities are crossing her path.

Jennifer remembers being frustrated about having a career she did not love. During her time working with me, she explored a number of different things without jumping into them.

She wanted to jump into them though.

She can’t remember how Coaching and Nutrition came to her. She explored what it would be like to be a health coach. She had always liked and been interested in this field. This came from an internal very inspired place. She found a program that seemed perfect, but when exploring some other things online, she found a second option that was a perfect fit for what she wanted to do. She found something that resonated with her. This all was an unfolding process.

There was no jump, no drama, or no lighting bolt hit of what she should do.

Jennifer explains her “knowing” as a feeling of hairs standing up on the back of her neck or an excitement in her body when she knew she was on the right track. It was subtle and calm. She is sure she had that same knowing all her life but just ignored them because she was so worried about focusing on the “how” it should look.

Jennifer Shares How To Get LOA Results

You can reach Jennifer at jennifer-hooper.com

Don’t miss an episode, subscribe via iTunes, Stitcher or RSS.
Leave me a review in iTunes.